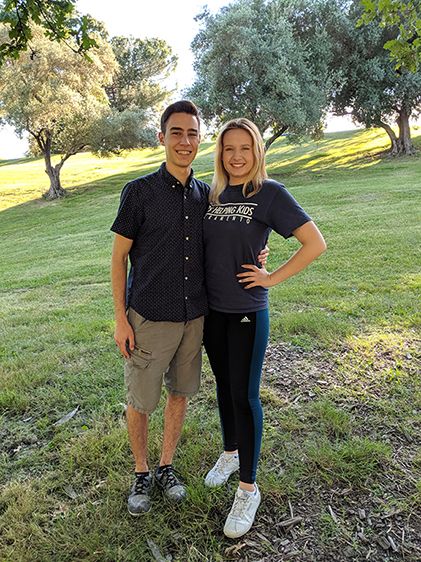 Charlie Bingaman (left) and Charly Ahrens (right) are both members of the Rotary Youth Exchange. Ahrens is completing her exchange and will be returning home to Germany at the end of June. Bingaman will start his exchange to Bolivia this August. Photo by Shaunna Boyd. 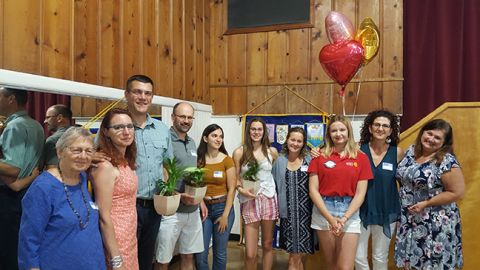 FAIR OAKS, CA (MPG) - Local Rotary District 5180 participates in the Rotary Youth Exchange through Rotary International. According to District 5180, the goal of the program is to “[bring] peace to the world one young person at a time through exchange.” In addition to learning a new language and experiencing a new culture, exchange students develop leadership skills and a strong sense of independence.

The Rotary Club of Fair Oaks is currently hosting Charlotte “Charly” Ahrens from Bremen, a city in northern Germany. She came to Fair Oaks in August 2018, and will be completing her exchange and returning home at the end of June 2019. During her time here, she has been attending Del Campo High School. Ahrens tried to find a way to distill the exchange experience into a single sentence: “You have this entire new life!”

Ever since she was a kid, Ahrens always hoped to participate in the exchange program. “My grandpa is one of the founding members of the Rotary Club of Syke, District 1850. He’s just always been very involved with Rotary, so I’ve always known about the program.… I never knew I’d go to America, but knew I’d go somewhere.”

Ahrens said that Germany and the United States have many similar values and are both modernized western countries, so she didn’t have to adjust to significant cultural differences. Schools in Germany teach English as one of the main subjects, so she already spoke the language fluently without much of an accent.

The major difference she noted is that many Americans live quite wastefully, and it took her some time to get used to the amount of plastics that are so casually thrown away. Her favorite part of the exchange has been building new friendships: “I’ve had really awesome host families.… I’ve just been really blessed with the people I’ve met during this experience.”

“The program gives you a lot — all those experiences, all the new things you learn, and the new people you meet. You learn a lot about the country, but you also learn a lot about yourself.… You just grow a lot… and you find out a lot of things about yourself that you probably wouldn’t have… if you had just stayed at home. So it definitely broadens your horizons.”

The Bingaman family was Ahrens’ second host family. She became friends with their son Charlie Bingaman, who will soon be embarking on his own exchange. After his upcoming graduation from Sacramento Waldorf School, Bingaman will be traveling to Tarija, a small city in the southern part of Bolivia. Bingaman said that Bolivia is the second poorest country in South America: “It’s very beautiful, but it’s also very, very different in every way.” Bingaman doesn’t currently speak much Spanish, so he expects significant challenges while adjusting to the culture and the language: “It will be a really cool change. I’m excited.”

“Bolivia is about as opposite as you can be, which is really what I’m looking for,” said Bingaman. “The language will obviously come from the immersion; I don’t expect people to speak English.… I will be forced to learn the language really quickly, which I’m really thankful about.” During his exchange, Bingaman plans to participate in several excursions: a journey through the Amazon, a Patagonia trip through Argentina and Chile, and an expedition to visit the ancient ruins in Machu Picchu. “We get so many benefits because of the generosity of the local clubs,” he said.

Bingaman described the Rotary world as “vast,” with clubs all over the world. Many districts send hundreds of students to a variety of countries each year, while just a handful of local students participate in the exchange program here in the Sacramento Region. Bingaman said, “That’s the cultural difference: Americans don’t have it ingrained to travel or to experience the world and have a diverse viewpoint… which really affects the way we work with the rest of the world.”

Both Ahrens and Bingaman see the value of the international Rotary Youth Exchange and hope more students take advantage of this amazing resource to become true global citizens. Students are eligible to participate in the exchange program between the ages of 15 – 18½, and they do not have to be from Rotarian families. The exchange usually takes place during the academic year; students attend local schools in their host countries and live with approved host families.